What you are looking for?
Brands
Capacity

Aramis was the first prestige men’s fragrance to be sold in department stores. . It was first released in New York then became available in Harrod’s the year following its release. Today it is now sold in over 120 countries and is often associated with 1970s disco culture. The nose for Aramis was Bernard Chant and was something of a precursor to many contemporary fragrances today.

The brand continues to be a defining pillar of The Estée Lauder Companies as an industry leader in the men’s fragrance and grooming category. Aramis has maintained its equity, global brand ranking and classic appeal through the years. The Aramis Fragrance and Grooming collection embodies classic masculinity and sophistication that transcend time.

Shop and discover the Aramis brand at Fascination Perfumery, which continues to be a classic choice for men’s fragrances. 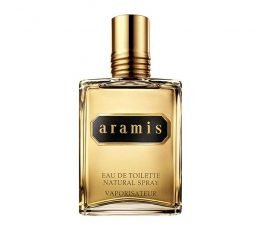